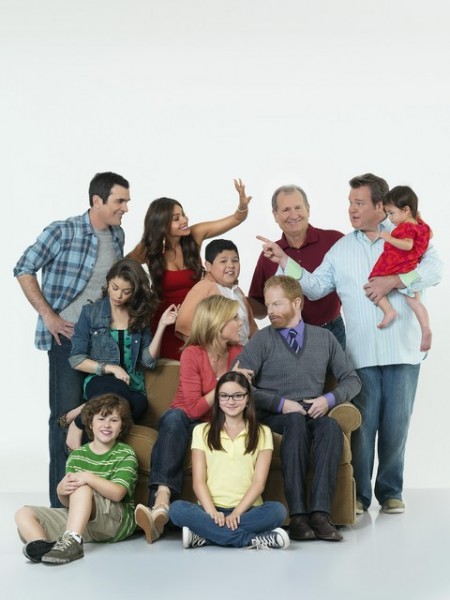 Modern Family was an award winning sitcom from ABC that told the story of an extended family. The show centered around the multi-generational Pritchett family and its three family groups. Modern Family recently concluded its eleven-season run on ABC.

The head of the family, Jay Pritchett(Ed O'Neill), is a true man's man who has recently married again - this time to a much younger Colombian woman, Gloria (Sofia Vergara). Jay now finds himself with heading a young family again with Gloria's young son, Manny (Rico Rodriguez). Jay's own kids, Claire (Julie Bowen) and Mitchell (Jesse Tyler Ferguson) are long grown up and now have families of their own.

Claire and husband Phil (Ty Burrell) are the parents of three children: Haley (Sarah Hyland), their fifteen-year-old daughter who is growing up a little too fast, Alex (Ariel Winter), their thirteen-year-old daughter who is too smart for her own good, and Luke (Nolan Gould), their rambunctious ten-year-old son. While former-wild child Claire desperately wants to keep discipline in the house and stop her kids making the same mistakes she did, Phil is more interested in being their "cool dad" and more of a friend than a parent.

Mitchell and his partner, Cameron (Eric Stonestreet), recently adopted a Vietnamese baby, Lily, into their family. Mitchell and Cameron are quite different: Mitchell is more reserved and does not like public displays of affection, while Cameron has an outgoing personality and is much more comfortable in his own skin. Together they are figuring out how to be the best fathers for Lily.

Since its premiere in 2009, Modern Family has won numerous awards and the plaudits of critics. The show has been the recipient of a Peabody Award, Writers Guild Awards, Directors Guild Awards and has won six Emmy Awards, including for Outstanding Comedy Series. The show has also been a success with viewers. After only three episodes had aired, ABC picked it up for a full first season on October 8, 2009. The show was then renewed for a second season on January 12, 2010. A third season of the show was ordered by ABC on January 10, 2011. ABC renewed Modern Family for a fourth season in May 2012. In May 2013, the show was renewed by ABC for a fifth season in 2013/14.

ABC announced in February 2019 that it had renewed Modern Family for an eleventh and final season to air in 2019/20. The final season premiere on Wednesday, September 25, 2019. The hour-long series finale aired on Wednesday, April 8, 2020.