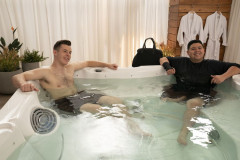 ABC has issued the press release for the next episode of Modern Family, "The Prescott", which airs Wednesday, January 8.

The Prescott” – Alex’s new company is putting her up at a new luxury apartment with full amenities and a list of high-profile residents that the family is eager to take advantage of, without her knowing. Phil is on a mission to review the restaurant’s famous sliders for his food blog, while Mitch and Cam sneak in separately to meet its most famous resident, David Beckham. Meanwhile, Luke and Manny head straight for the gym to try and pick up on older women and end up in some hot water with a few of the residents on the midseason return episode of “Modern Family,” WEDNESDAY, JAN. 8 (9:00-9:31 p.m. EST), on ABC. Episodes can also be viewed the next day on ABC.com, the ABC app and Hulu.

Phil pays a visit to his dad to make sure he is ok after hearing some concerning news about him. Meanwhile, Jay gives Claire and Mitch a bunch of their old childhood memorabilia that triggers them to reevaluate a long-held story about their first family vacation.