As the eleven-season run came to an end last night, 7.4 million people tuned in to say goodbye to the Pritchett family.

The hour-long finale scored a 1.6 rating in the key adults 18-49 demographic, its best performance since September 2018.

The special retrospective "A Modern Farewell" was watched by 6.72 million people and had a 1.3 rating in the demo. 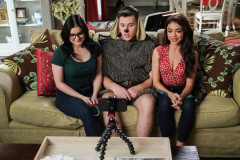 The entire family discovers saying goodbye is much harder than it seems.