ABC has released the synopsis for this year's Thanksgiving episode of Modern Family, "The Last Thanksgiving", which will air Wednesday, November 20.

“The Last Thanksgiving” – Cameron and Mitchell’s friends mistakenly assume they have split up and have definitely chosen a side, and Haley attempts to cook Thanksgiving dinner as a thank you for Claire and Phil’s support with the twins. Meanwhile, Jay invites Phil and Dylan out to fly his model plane, and Phil thinks this is his chance to reclaim his dignity after their first outing 10 years ago went so wrong, on an original episode of “Modern Family,” WEDNESDAY, NOV. 20 (9:00-9:31 p.m. EST), on ABC. Episodes can also be viewed the next day on ABC.com, the ABC app and Hulu. 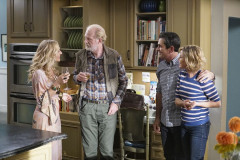 The Dunphy house is bursting at the seams when Dylan’s hippie mom moves in and Claire’s lonely stepdad, Jerry, wants to pay them a visit. Meanwhile, Jay and Gloria attempt to help Manny get over his big breakup with Sherry.