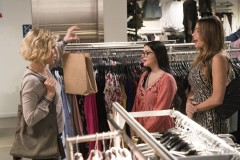 Haley needs a little motherly advice from Claire as she considers her future with Dylan and her career. Meanwhile, Jay and Cam’s less than politically correct coaching style earns them a class on sensitivity from Manny and Phil; and Mitch runs into Phil’s nemesis, Gil, at an unlikely place.

1007 - Did the Chicken Cross the Road? Next Episode