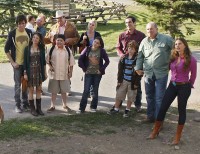 Last night's season premiere of Modern Family dominated its timeslot, beating Fox's premiere of Simon Cowell's new reality show, The X Factor, to finish in first place. The double showing of Modern Family saw the extended Pritchett clan head to a retreat in Wyoming and Mitch and Cam decide to adopt another child.

The third season premiere was watched by 14.30 million people and scored a 9.8/15 rating in households. Modern Family scored a 6.0/15 rating in the ever important adults 18-49 demographic.

The extended family head to Jackson Hole, Wyoming for some fun and adventure in the great outdoors.