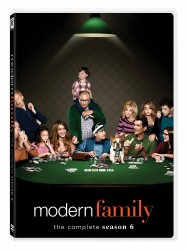 The Pritchett-Dunphy-Tucker clan is a wonderfully large and blended family with JAY PRITCHETT sitting at the head. By his side is his vivacious, younger second wife GLORIA, and together they are navigating life with a new baby, JOE, and Gloria's teenage son MANNY, who has taken to high school with the same charm and gusto he's had since he was little. Meanwhile, Jay's grown daughter CLAIRE and her husband PHIL are trying to keep up as their kids grow up right before their eyes with the youngest, LUKE, now a sophomore in high school; middle daughter ALEX is graduating this year and looking at colleges, and HALEY, the eldest, is living at home and pursuing a career. Then there's Claire's brother and Jay's grown son MITCHELL, who just married his longtime love CAMERON. Both are enjoying life as newlyweds and raising their sassy, adopted six-year-old daughter LILY. These three families are unique unto themselves, and together they give us an honest and often hilarious look into the sometimes warm, sometimes twisted embrace of the modern family.